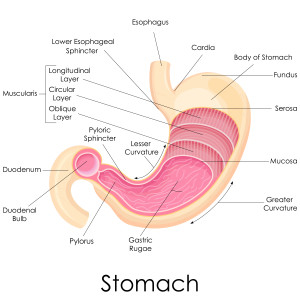 We have mentioned that GERD is an important concern for patients with IPF.  We have ample data showing that patients with IPF are at greatly increased risk of having either symptomatic or silent (without any symptoms) GERD and even aspiration of small amounts of stomach contents into the lungs.  However, what remains unclear is how this should impact patient care.  We don’t have compelling data that proves that GERD causes IPF and we have no high quality data that treating GERD improves patient outcomes.

The most widely held belief is that GERD leads to silent micro-aspiration (unnoticed inhaling of stomach contents) and patients with IPF for unclear reasons have an exaggerated response that leads to or propels their IPF forward.  Data supporting this position comes from studies showing that the vast majority of patients with IPF when studied carefully have acidic stomach contents that reflux into their esophagus.  Furthermore, IPF patients with GERD have a more rapid decline in lung function.

Another group of experts is less convinced that GERD is the engine that drives IPF forward and believes that IPF leads to GERD.  Patients with IPF have stiff lungs.  This results in more negative pressures inside their chest.  This negative pressure may act to draw stomach contents into the esophagus thereby causing GERD.  In this theory, patients with more advanced disease or stiffer lungs are more likely to have more GERD and more rapidly declining lung function.

My take on this complicated and important issue is that I believe that IPF is a progressive and difficult to treat disease.  At this point in time, the balance of the data supports at least some role for GERD in IPF.  Our current treatment options are limited and less than ideal.  The risks of acid suppression though real are very small in the 5-year timeframe and can be reduced by taking supplemental magnesium.  It is naïve to think that taking an omeprazole pill once or twice a day will cure gastro-esophageal reflux.  At best acid suppression removes the acid (raises the pH of stomach contents).  I strongly encourage my patients to elevate the head of their bed and avoid foods known to promote gastro-esophageal reflux such as alcohol, caffeine, citrus, fatty foods, spicy foods, large meals and late meals. 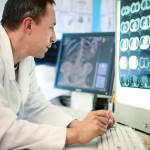